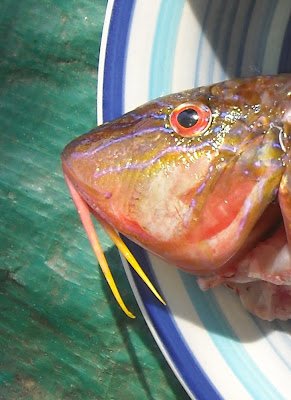 I've been trying to get the writing pace on the book up onto the plane (books are very like boats - once the story get moving fast enough they skim along almost above the level of stuff you have push through. Go slow and it takes an unwarranted amount of effort to write at all. What is unforgivably worse -- for me -- is that it makes turgid reading.) So after our 'weekend' of hard fishing yesterday, I stuck to the desk most of today, and B went off to 'furrin parts' - Lady Barron. It is nearly 25 km away and to hear some of the locals talk about it you'd swear New York was closer, and Mars not quite as alien (ooh they're strange down there! heh. Not.). B returned with a brush-cutter which we'll try as a mower so long. She's not as dangerous with that as the chainsaw but, my friends, always treat a lady who can weild a chaisaw like that with extreme politeness. She was out in the heat today giving it a test run. I heard it yowl in protest but B repressed it well, and broke it to harness. Next step, the hayfield... uh lawn. It's greening up. The island looks a bit like South Africa in midwinter in high summer here, and of course is a lovely green most of the rest of the year.

My only break really has been to look up goatfish (red mullet) -- picture of beardy above, and wonder if I believe the beggars that say it's good eating. We'll try it of course. I turned some of the smoked pike from yesterday into smoked pike, grated zucchini, beet-root leaves and spring onion fritters (all garden stuff) - which were actually exceptional. I bound it with egg and flour (about a 1/3 cup) and fried them. We had them with Inge's tomato chutney and baked caliban... uh Coliban potatoes. Color me unimpressed with these. They're very floury. Must be good for something but not great baked.

And then after supper we had another quick go at the squid. Whitemark is a wild place, people drive down to the pier... and drive away. Still we met chatted to few more people, learned a little more. B got one squid, and we were given another trevalley by another fisherman. If he didn't want it, I certainly did!
And the sky gave a another curse-of-artist sunset (if you painted it, all the veiwers would say 'how fake') 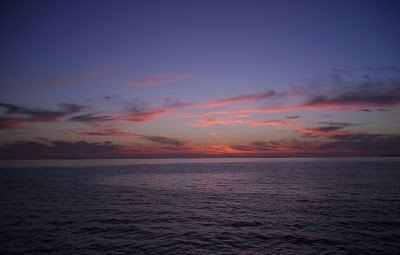