The evil oven is dead, long live the oven

Or not. John's horrible old banger of a stove with which I have a hate-hate relationship has finally met its end, or at least the oven and one plate has, and one plate only works on hot. While fixing/replacing it is our landlord's problem, we still need a stove and as this is an expensive place to cook on electricity, I decided to sort out my too large for the kitchen gas stove, which has big good oven in which I could do bulk, and at least have an oven in the shed... Hmm. Our South African regulator doesn't fit. And we can't get one on island. So for now I have no oven. On the other hand we've just bought (but not collected) another deep freeze.

I cooked little wallaby and bacon kebabs with thyme, pepper and green sauce, and some crayfish for supper tonight. 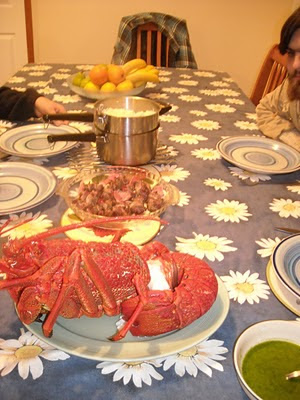 Oh and Telstra, that wonderful company with the superb customer service and best store in the universe in Hobart's Eastland's mall... in some other very not-parallel Universe, decided to try threatening phone-calls today because, despite having my eventually got co-operation out of them by threatening them with the Telecoms Ombudsman (up to which point that had been the worst, least ethical and least helpful, least co-operative company in my experience of Australia, at which point they suddenly changed tune) and having made them refund me for the piece of non-working junk their bigpond arm had sold me, that I'd returned, been credited for... that they'd like to bill me for it (and I paid cash for it in first place!!!!!) So I quoted the relevant numbers of my current bill - which is up to date (it's the first one that I've not been in credit for - they got $8.10 - that's how badly they screwed up.) They're not exactly employing any rocket-scientists. They generously offered to continue the abusive phone-calls until I fixed their record-keeping problems for them (There are perhaps 20 pages of correspondence on this on their records, on file, linked to their account number available to them - but it's easier to make you look it up and explain it to them.) It took me a long time to get them to work out that they were re-opening a can of worms they'd created in first place. I do understand why everyone says 'telstra!' and rolls their eyes now.
Posted by Unknown at 8:16 PM