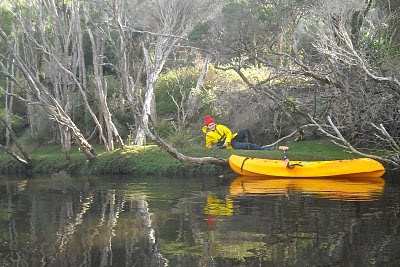 It was fairly brisk today, but seeing as Clare's visit is drawing sadly to a close, we went off to kayak Patt's River at high tide. Ergo the picture above which I sending in as a possible centerfold to the popular 'Overdressed Kayaker's Weekly' Magazine (Actually I promised to send it to Paddy). The water is the color of slightly dodgy homebrew (possibly because of half frozen dead wallaby in it, or the tannic leaching of the forest floor in the montaine forest from whence it comes) and with stark flappy white of paperbark trunks set in the verdant green mosses that coat the icky mud banks is most picturesque - until you try to dismount your trusty inflate-a-galleon (I was on the inflate-a-galleon upstream) and discover that the mud is nearly the perfect frictionless surface, and you fall on your dignity (or in Clare's case alight your kayak with a startling involuntary acrobatic leap, that, contrary to all probability, doesn't dump you into the water). 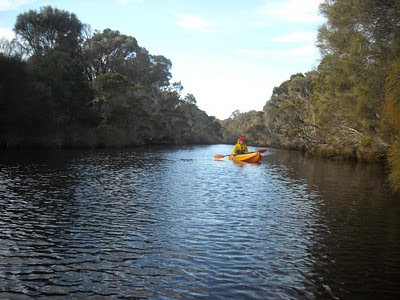 Still, for something that takes less than 5 minutes to get to and has a good 2km of paddling without the sight of humans - it's pretty special. Upstream of the weir could be paddleable too - we did go perhaps 50 yards, but the dead trees and obstructions add a whole new dimension to paddling the inflatable galleon, and the water is icy (a lot colder than the sea) - which doesn't make sinking attractive.