How does the Echidna sit down? 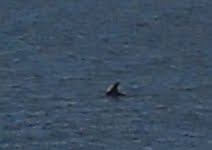 They waited until we were out of the water - mouths too numb to speak properly having dived around the limestone bhommies and mushrooms and swum through the arch, and darn near frozen, before coming cruising within 20 yards of land. Dolphins - four of them moving in pairs in perfect synchronous lazy arcs through the crystal turquoise water... you think I could get a picture... I have about 30 of the water. One lousy one of a fin.

Anyway, we also saw my first ever Echidna. Forgive the picture of its spiky bum only, but I was not prepared to disturb it to get a frontal veiw. It has a curious mixture of hair and spikes looking like a dirty blond t' yoof of today having got a little ardent with the hair gel. I reckon you could go clubbing with an echidna on your head and the average club-bunny would think you were just soooo fashionable. Even better than a mullet (which I was set to make my fortune selling as head-fish before...) Oh dear. Have I doomed the entire species? 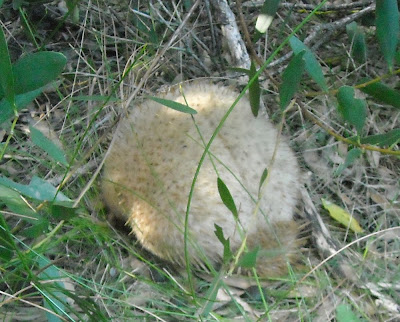 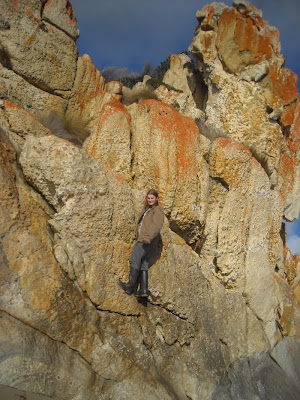 It's never going to be a great climbing destination but it is another little plus for Fantastic Flinders.
Posted by Unknown at 8:50 PM