We all saw the sunrise! 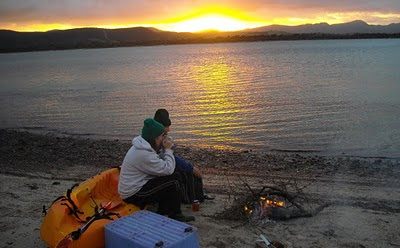 This morning Dave had us up long before it was light, but the wallaby already knew that morning was breaking, so they tested our brakes several times on the way to the beach.

The sky was just starting to get lighter as Dave paddled out on the kayak and set the new net in the sea. Unfortunately in the dark he did not go out far enough, and so the net was not set in the best spot. 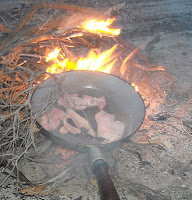 But we made a fire on the beach, far away from anything that could possible catch, and using the kayak as a seat, we feasted on the egg and bacon Dave cooked.

After coffee/tea it was time to get the net in. We landed a lot of weed, but no fish. Next time we (Dave) will go deeper, further, and hopefully catch more. But it was a great start to a day.
Posted by Barbs at 12:30 PM