Is worthy of a tiny token of its appreciation on the fingers. 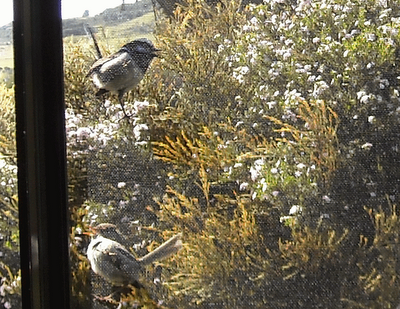 The superb fairy wren and his girlfriend are hanging at the local bug-house (aka the screen outside my window) and canoodling, and like any teenagers, tweeting about it. And getting themselves into trouble. Well, into my study anyway. I had the both of them in here the other day. They had been reading the story on screen while I had been planting. I managed to shoo them out before they nested in my beard. This morning himself the pretty-blue-chested fellow's drab girlfriend was inside the window when I came back from feeding chooks and as himself was outside the window she refused to be shooed and both were getting into a panic. So I caught herself and caged lightly in my fingers took her out (himself was twittering away to get a flashmob to deal with me). She left me a token of appreciation on deposit. It's a good thing hippopotomii don't fly and need rescuing from my window.

We're trying out an LED globe in the kitchen. It's bright but hell if you look at it. And the ceilings here very low, so it it is hard not to.
Posted by Unknown at 9:04 PM