The paranoids don't know the half of it 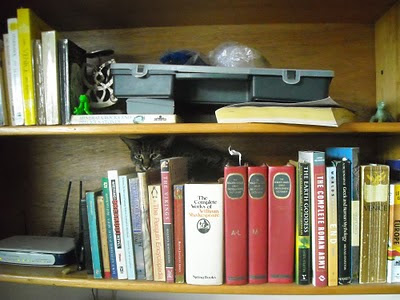 Besides secret agent batcat ('he'll never see me here') making sure I was working from his hide in the shelves above my computer, I also endured the indignity of a temp'ry sex change in that I was allowed to cook soup and chocolate bread for the CWA (Country Women's Association I think) soup and sandwiches fundraiser. The skirt was OK, after all the Scottish dancing (and if it was good enough for my Scots ancestors, it's good enough for me), but I draw the line at cooking in high heels. I'll do curlers in my hair (and beard) if I have to do it again instead - which I may seeing as B was invited to join today. I think that is a 'you're fitting in' compliment. I think it is rather like the WI in the UK, about which my knowledge stops at the movie'Calender girls'. Hmm. so.... Gardening, flower-arranging, pickles, jam-making and cooking... They got the wrong one of us :-). B's more inclined to chainsaws and brushcutters. Neither of us do flower arranging terribly well (although if I do say it myself I have a natural talent for the Japanese 'grabbed a bunch and shoved it in a vase' look that other people spend years trying to learn). But B is really good at fitting in and doing things that need doing quietly, and getting on with people, so I am sure it'll be fine. Besides, we give them something to talk about and laugh at. heh. I don't mind but just every now and then I find myself feeling like a giraffe making sorbet at a French cookery school. It's not so much the giraffe's cooking skills (which are not great) but the fact that it is doing so at all that causes everyone to marvel. Anyway, we made them 'boontjie sop' because it seemed appropriate. After all, that's boerekos, and this is farming country. It was popular, apparently. I've probably made more traditional Afrikaans food for functions here in six months than I had in twenty-six years back in the old country. People are curious and I suppose we're obliging that.
Anyway, back to editing.
Posted by Unknown at 7:23 PM