"Step ye gaily on we go, arm-in-arm and row-on-row, heel-to-heel and toe-to-toe, All for Mairi's Wedding"
trad. scots folk song

We were invited to the reception of our first Island wedding this last weekend -- of course it had to happen after our day at sea -- so we were dead-beat and I really am still mending from the last bug. But it was probably the best wedding reception I've ever been at, because it was so different. I've never been at a sing-along reception before. The bride is a friend of ours who sings with the local Sing-Australia group and she and her new husband were most dapper being put through dancing "under the boardwalk" under instructions from the hyper-enthusiastic chior leader (She obviously enjoys this and gets completely involved, eyes lit up like Vegas neons, and conducting with shall we say verve. It's great and she carries her singers along like a full tide) while the entire crowd provided the vocals. It was really funny to watch the incomer guests at the wedding. Embarrassed at being seen to sing in public, and quiet-voiced at first... but seeing as the locals are giving it a good volume, joining in... and by the time we got to 'Sweet Caroline' giving the rafters a good rattling along with the rest. The food too was real 'Islander' - people brought plates of all sorts to the do, everything from ornate cakes to plates of cheese and biscuits. From the flowers to the decorating - everyone had some kind of hand in it. It was a wonderful bit of community, something you'll not find easily elsewhere.

I hope that the day they married and the day death parts them are the two worst days of their marriage - because they're the only two days of their time together that are not a full 24 hours of being happy.

Otherwise we went to the Interdenominational St Francis day service out at the Patriarch Sanctuary - the Cape Barren geese came to inspect - as did a wallaby with Joey. She bends to eat and he tastes around as she does. 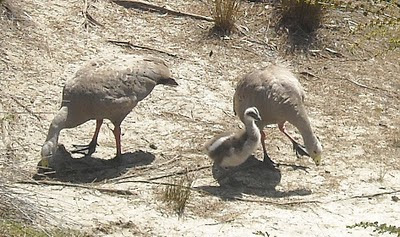 And cooked the most enormous burgers I have accidentally made. I set out to make burger buns and left them to prove while we were at the reception... as a result, I had to make XL patties - 1/4 kilo patties...

Today was B's first day of being employed - temporary filling for a guy who is off sick in the school gardens. It's not exactly what she's trained to do, but we knew that we'd have to adapt, and I'm so proud of her getting in and doing it. Given the cost of coming over and all, and the sinking US$ dollar, and rising Aus $, our budget is not a happy place.

We ate the fillets of our 'Gurnard-perch' (drat these common names) - it called 'poor man's crayfish' and despite being a small fish and a PITA to clean safely it's quite aptly named and very good.
Posted by Unknown at 8:37 PM