The intrepid hunter, armed only with his traditional weapons of a bucket and trowel went off dung-hunting today. Tracking dung takes many years of practice, and must be undertaken with great care as dung can be particularly savage when cornered. And of course the ethical hunter must follow any dung he has failed to bucket with a clean scoop as wounded dung should not be left to suffer. Until you have tried this field-sport you have no idea of the thrill of the chase. I have a spare bucket and trowel...

Yes, actually I have been collecting cow-pats for the veggies. I have a 25 litre bucket full. I think these will have to 'mature' somewhat, but I hope they'll add to the fertility and water retention a bit.

This morning I had a cat in my drawers - in all senses of the word, as Robin cat decided that I could only have opened my underpants drawer for her exclusive benefit and leaped into it. She then decided to nest in there, only being willing to remove herself when I gave up trying to talk her out of it and went to fetch a camera.

Poor B is in the wars. She went to the Landcare treeplanting today and managed to stab herself in the eye. According to our good Doctor Biren she has scratched her cornea (not over the iris TG) and so is restrained from reading until tomorrow. Eyedrops and some discomfort are being experienced. To add insult to injury she's also suffering a very stiff arm, hand and wrist... not from tree planting, but from her intrepid salmon-catching yesterday. You see she SHOULD have tightened her drag on the reel, and worked the fish on the rod, but, um driven by excitement she just wound rilly rilly rilly rilly fast. The crank was smoking :-) and it made no real difference. Heh. She got it in, and I try not to inerfere too much. 'Just keep your rod tip up.' She'll learn. And she is, fast. 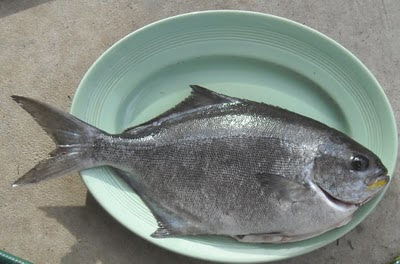 That's a roast platter, so a fair size fish.

I prefered to to the Australian salmon but it doesn't rank with yellowtail, trevally, garfish, flounder, or flathead, the flesh being quite delicate and soft - (I fried the fillets a la meuniere as I like to do with all 'new' fish to taste them and learn how best to cook them.) It would be VERY easy to overcook, at which point it will be horrible. It's a lot less fishy that salmon but a richer (more oils probably)fish. It's also a right bastard to get the pin-bones out of, although it fillets off the ribs well.
Posted by Unknown at 1:09 PM