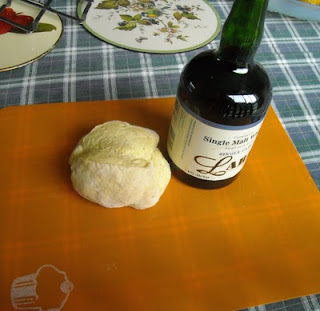 By popular demand my pumpkin and poppyseed rolls recipe.
The whiskey* variation recipe which may appeal to some of you.

1 and a quarter cups tepid water,
2 tsp yeast
2 tbsp raw sugar
1 tbsp milk powder
1 and half tsp salt
2 tbsp cooking oil
3 tbsp cooked mashed pumpkin (or 4 maybe :-))
1 tsp poppy seeds
3 and a quarter cups plain flour.
Got all of those in one bowl? Good. Have a whiskey to celebrate. Raise your glass to the bowl. It helps the rising process.
Now, knead the above together. Leave to rise in warm place for at least 2 hours. That's a long time so you may as well have another few wee drams to pass the time.
Put the dough onto an oiled and floured baking tray. Divide and shape into six rolls. Put into a warm place for at least half an hour. Time for another drink, while the oven warms to 190 C.
Once the rolls have done their second rise (at which point you can -if you so desire, paint them with a pastry brush. Most people advocate a egg-yolk and water mixture, but by this stage of the whiskey bottle red ochre may seem good. It isn't really, but it may seem that way), slash the surface of each roll with a sharp knife, trying not sever fingers or anything else vital. Now put into the oven for 18-20 minutes (depends on the oven I guess.) If you drink any more of the whiskey (which will seem like a very good idea by this stage)you will pass out and burn the rolls and probably burn the house down.

I have been told this is a very popular recipe, and has encouraged a great number of men who had never shown any prior culinary interest to become quite keen on the idea.

*For best results you may be wise to omit the whiskey. It doesn't taste quite the same though ;-)
Posted by Unknown at 9:36 AM