The clouds are rolling over us in thick fuzzy grey waves, with little white edges of lighter cloud looking like it went to the Cloud-hairdresser for a rather half-hearted highlighting job. Strzlecki mountain is in Obelix's famous words just like Switzerland -Flat! It has vanished, disappeared into the grey legion driven by the whips of relentless wind-sergeants. It's the sort of misery day I expected a lot of winter to be.

I've been playing catchup on the myriad small things I've set aside for getting round-tuit when the book was in. Other people have a list... I have lists. In fact I have a list of to-do lists. If I was a ship you'd say I was unseaworthy. Actually, you'd probably say that anyway, and be quite right too. I will blame it on Batman who has decided he's tried adult cat dignity and did not like it much so he's at 5 gone back to being a kitten, who regards me as his attackable toy.

We were given an olive tree tube-stock - Leccino - which means we'll have to get a Frantoio for it to cross pollinate. We planted it in a huge pot -- they say where you plant an olive, you plant a piece of your heart. I've planted Olives in Paarl, in Eshowe, at Finnegan's Wake at Mount West. I have no more spare bits of heart left, so got B to plant this once in the vast plastic shrub-tub I found at Roberts. That way, like the rock, we can take it with us on that last stage of the journey. I like the John's place, and it's been a Godsend, but it's not a place of our own. That's not really getting any closer, but, well, onward. We'll get there. Just a few million more books...

The seed order to Phoenix seeds has gone in (much to John-the-Post-office's amusement, because I was there without my glasses. He gave me teeny tiny forms to fill in. Laughed like hell at me, and then did it for me. Only on Flinders Island.) I am still worried the PC police will get me for abusing 'gross Lizzy' (Gross Lisse - the variety of tomatos everyone has told me to buy - pronounced locally gross lizzy). John's theory is B keeps me from going off the rails and not working by holding my glasses hostage.

I met our new cop who has replaced Policeman Pat (AKA twinkletoes, as I used to see him running in his luminous reflector shoes in the early morning - or rather I didn't see him, I saw his shoes.) and introduced myself to him. Seemed a friendly-enough bloke. Seeing as he'd stopped to chat to the fire-watch guy, I was careful to lock my door (as the Tasmanian government in their eagerness to protect the insurance companies and punish the victims of crime have made this mandatory, and expect the cops to punish wicked no-lockers. It makes about as much sense on Flinders Island as crowd control. It's an island. It has about 700 people, maybe 300 of whom are under 70 or over eight. Given the fact that it's a big island and a large part of those 300 are just too far away or or have unimpeachable alibis a lot of the time, any dirty deed would struggle to find more than a handful of suspects. If the cops can't find a stolen car - or catch any other Ned Kelly, it's hard to imagine what they'd do in a vast metropolis of say five thousand people :-) I can imagine they might have a rough time with poaching or drink driving or people growing weed in remote spots, but it's not really a car-theft (or even theft from cars) kind of place. I see today that one of the suburbs in Tassie has had a rush of blood to the head and is going to fine the victims of graffitti if they don't clean it up. Gah. So sensible to punish the victims. They're easier to catch than perpetrators. I think Australia is wonderful, Tassie is pretty close to God's own Country... but I do wonder why no one tars and feathers politicians who come up with these daft laws. Really, even the smell of tar makes them thoughtful and considerate. Anyway, to get back to the point the new cop laughed at me and said "what are you doing that for?"
I said old habits die hard - and after South Africa that's true. Anyway, he'll do, I think. 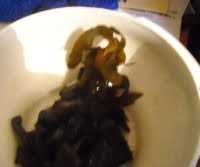 And last night I cooked the catch of the day - my catch anyway - Konbu - kelp of some sort. I'd hooked it when fishing for wrasse, so it was nice and fresh. I rinsed it in fresh water, and then added a piece to the rice, and boiled it with the rice. It added a very slight and not unpleasant flavour. I also diced a couple of inches very finely and fried it with the fennel-bulb, to which I added a little tomato. It's supposed to be full of all sort of goodness. Just ask any weed-eating fish (come to think of it most of them stink and don't taste too good. hmm). Honestly, in both I barely knew it was there, rather than being affronted by the taste. I've spent years meaning to get around to it and expecting it to be horrible - and it isn't.
Posted by Unknown at 2:53 PM