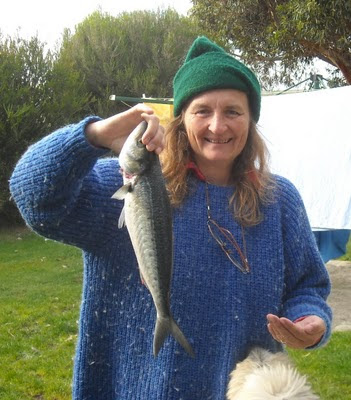 We went out to a friend for tea, so took the rods with us, in case we decided to throw a line on the way home. ( He wants to know when to expect to catch eel in the river mouth? Does anyone know what time of year they come in?)

I was worried about the weather as I had a down duvet/doona on the line outside, so we came back to the west side of the island to keep an eye on it, but it looked okay to fish for a bit.

So we went to some rocks close to Castle Rock, which is featured on every tourist pic of the island, and cast out with some squid bait. Dave caught a Wrasse, and I thought 'this is great the cats will be happy'. And then something took my bait and pulled. It fought, it went to my right around some rocks, and I thought that would be the end, but it came in close below me and then off again round to the left. By then I had worked out that it wasn't a Wrasse, as they just pull a bit, but had no idea what I was fighting.

After what must have been 5 mins, but felt like 15, Dave managed to scoop it into the net, and it was an Australian Salmon, 705g after gutting, but it looks really good. Especially as I did not lose it while it was fighting.

It is the first real fish fight I have had since we got here, so it was wonderful to actually land the fish, with Dave's help of course, and I am looking forward to tasting it tonight.
Posted by Barbs at 3:07 PM